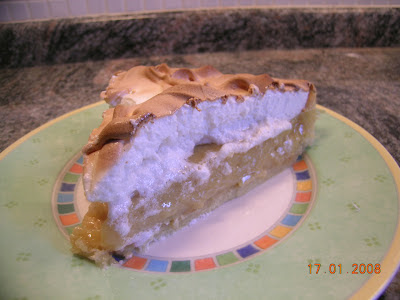 I read quite a lot about the Daring Bakers and finally plucked enough courage to join them. January was my first challenge and was pleased to find out that it was going to be Lemon Meringue Pie.
I have made this quite often as lemons are very abundant in my part of the country and at this time of year, I get boxfuls of them from farmers. Most of the time I grate the lemons and freeze the zest and also squeeze out the lemon juice and freeze in ice cube trays. Then I empty into a freezer container and I always have lemon zest and lemon juice handy.
Making a different version to my of the LMG was a challenge and was reluctant to divert from my usual recipe. But I was happy to try and compare to my own.
I found the recipe quite easy to follow despite the cup measurements. I do have american cup measures but find them a pain to use. I did use them though and out of curiosity, I decided to weigh the ingredients afterwards. It was perhaps a coincidence that the weight in grams was almost the same as the amounts given by the Canadian Baker in mls. I wonder whether she meant grams in the recipe instead of mls.
I approached making the filling with trepidation as quite a few DBs posted that they had problems with the filling being runny. I did not have such problems. I did not like the idea of adding vanilla extract with the lemon but decided to add it so as to follow the recipe exactly. It changed the beautiful lemony colour of the filling to a dingy colour and I know not to use it the next time.
The LMP set very nicely, did not weep at all and the meringue was nice and soft on the inside. I hardly had time to photograph it as it was waffled down in a couple of hours. (There is only 2 of us in the household)
I thought I would give a pictorial step by step account of my challenge. This will remind what I had to do for the next time. 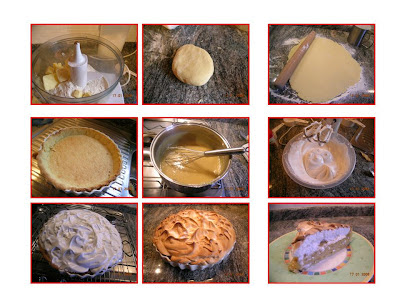 For the Crust: Make sure all ingredients are as cold as possible. Using a food processor or pastry cutter and a large bowl, combine the butter, flour, sugar and salt. Process or cut in until the mixture resembles coarse meal and begins to clump together. Sprinkle with water, let rest 30 seconds and then either process very briefly or cut in with about 15 strokes of the pastry cutter, just until the dough begins to stick together and come away from the sides of the bowl. Turn onto a lightly floured work surface and press together to form a disk. Wrap in plastic and chill for at least 20 minutes.
Allow the dough to warm slightly to room temperature if it is too hard to roll. On a lightly floured board (or countertop) roll the disk to a thickness of ⅛ inch (.3 cm). Cut a circle about 2 inches (5 cm) larger than the pie plate and transfer the pastry into the plate by folding it in half or by rolling it onto the rolling pin. Turn the pastry under, leaving an edge that hangs over the plate about ½ inch (1.2 cm). Flute decoratively. Chill for 30 minutes.
Preheat oven to 350ºF (180ºC). Line the crust with foil and fill with metal pie weights or dried beans. Bake for 20 to 25 minutes. Carefully remove the foil and continue baking for 10 to 15 minutes, until golden. Cool completely before filling.

For the Filling: Bring the water to a boil in a large, heavy saucepan. Remove from the heat and let rest 5 minutes. Whisk the sugar and cornstarch together. Add the mixture gradually to the hot water, whisking until completely incorporated.
Return to the heat and cook over medium heat, whisking constantly until the mixture comes to a boil. The mixture will be very thick. Add about 1 cup (240 mL) of the hot mixture to the beaten egg yolks, whisking until smooth. Whisking vigorously, add the warmed yolks to the pot and continue cooking, stirring constantly, until mixture comes to a boil. Remove from the heat and stir in butter until incorporated. Add the lemon juice, zest and vanilla, stirring until combined. Pour into the prepared crust. Cover with plastic wrap to prevent a skin from forming on the surface, and cool to room temperature.

For the Meringue: Preheat the oven to 375ºF (190ºC). Using an electric mixer beat the egg whites with the cream of tartar, salt and vanilla extract until soft peaks form. Add the sugar gradually, beating until it forms stiff, glossy peaks. Pile onto the cooled pie, bringing the meringue all the way over to the edge of the crust to seal it completely. Bake for 15 to 20 minutes, or until golden. Cool on a rack. Serve within 6 hours to avoid a soggy crust.

Email ThisBlogThis!Share to TwitterShare to FacebookShare to Pinterest
Labels: pasty 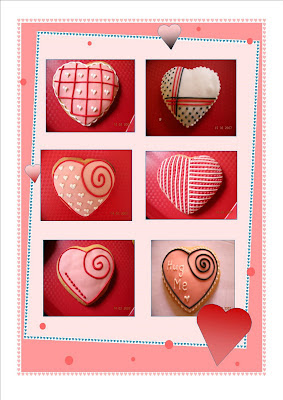 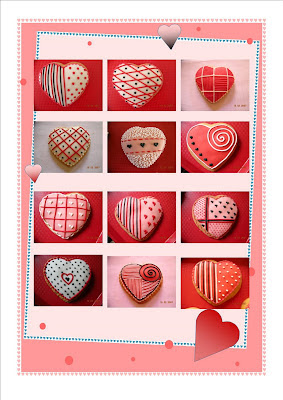 Valentine's day will soon be upon us and I am already getting exited about the new treats I shall be creating for the event. Every year, there is always something new. Last year, I made these lovely pastries that are usually made over here for easter. But I adapted them for Valentines. They are made out of sweet pastry which we usually add lemon zest and juice and then fill with almond and lemon filling. I decided to decorate them using sugarpaste and royal icing for the top decoration. I really enjoyed decorating them as once you start, you think of new patterns. I gave a heart to each of my sisters, sister in law and my nieces. They loved them.
Posted by simply at 9:41 AM 4 comments: 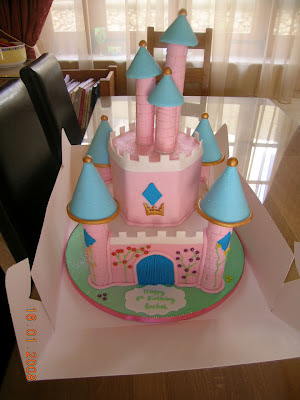 I had a pretty hectic week a while ago with 4 cakes to make. Since I have given up cake decorating business, I had less and less worries about deadlines. I thrived on deadlines a couple of years ago but now I find it ever so tense.

Well this cake was for little Rachel who loves the Disney princesses. She opted for the castle rather than Belle, her favourite princess. The castle came out ever so cute and despite not being as elaborate as my past ones, Rachel just loved it and was amazed as she thought that she was getting a flat cake with a castle painted on it.
Posted by simply at 10:47 AM 8 comments: 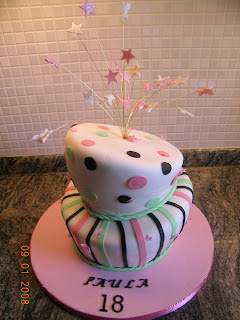 I made this lovely cake for my niece's eighteenth birthday. I made similar ones when I lived in England but these cakes have never been seen in Malta. I just wanted something different to show and perhaps get Paula's friends to see different variation of styles of cakes.

Everybody loved it and they also loved the colours.
Posted by simply at 10:35 AM 13 comments: